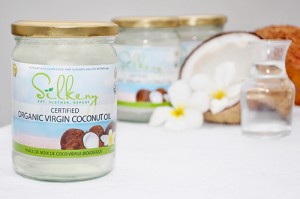 Silkeny Organic Virgin Coconut Oil is made from fresh sun kissed coconuts, harvested from the renowned Coconut Triangle in Sri Lanka where simple way of life still prevails with environmental pollution at its minimal and organic farming has been the way of life for generations.

Silkeny is produced in our own state of the art factory that is been certified with globally renowned certifications and we support the traditional farming and the communities in the triangle. Our oil is cold-pressed to ensure the highest integrity and quality, maintaining the purest flavour, aroma, creamy white colour and nutritional richness. The result is a 100% pure oil that is rich, decadent, and silky smooth from taste to touch, providing an oasis for your body, inside and out. This is the Silkeny difference.

We are crazy about coconuts! Why, you ask? Having been touted as the healthiest oil on Earth, the more research that is done on coconut oil only confirms that it is a restorative and healing superfood. We are just scratching the surface with all the health benefits it offers.

Our mission is to help educate people on the enormous health benefits that coconut oil offers. We want to encourage people to live and eat their best, and we firmly believe that integrating coconut oil into your daily routine, whether it’s taking 1-3 tablespoons each day to boost your energy and take in all the antimicrobial benefits, moisturizing your skin with it, or practicing better oral health through oil-pulling, coconut oil will contribute to your overall wellness.

Coconut flour is made from ground coconut meat and is an excellent high-fiber alternative to wheat. It has the highest fiber content of any flour having a very low concentration of digestible carbohydrates makes an excellent choice for those who must restrict their carbohydrate intake.

Coconut flour can be used to make breads, cakes, pies, and other baked goods. Use 15 – 25% in place of other flours in standard recipes.

Coconut sugar (also known as coco sugar, coconut palm sugar or coco sap sugar) is a sugar produced from the sap of cut flower buds of the coconut palm. Coconut sugar has been used as a traditional sweetener for thousands of years in the South and South-East Asian regions where the coconut palm is in abundant supply. Coconut sugar comes in crystal or granule form, lock or liquid. It is essentially a two-step process. It starts with harvesting or “tapping” the blossoms of a coconut tree.

Cinnamon has been in use by humans for thousands of years. It is even mentioned in the Bible as an anointing oil. Evidence suggests it was used throughout the ancient world, and that Arab traders brought it to Europe, where it proved equally popular. Legend holds that the Roman emperor Nero burned as much as he could find of the precious spice on the funeral pyre of his second wife Poppaea Sabina in A.D. 65 to atone for his role in her death.

Despite its widespread use, the origins of cinnamon was the Arab merchants’ best-kept secret until the early 16th century. To maintain their monopoly on the cinnamon trade and justify its exorbitant price, Arab traders wove colorful tales for their buyers about where and how they obtained the luxury spice.
One such story, related by the 5th-century B.C. Greek historian Herodotus, said that enormous birds carried the cinnamon sticks to their nests perched high atop mountains that were insurmountable by any human. According to the story, people would leave large pieces of ox meat below these nests for the birds to collect. When the birds brought the meat into the nest, its weight would cause the nests to fall to the ground, allowing the cinnamon sticks stored within to be collected.

Struggling to meet increasing demand, European explorers set out to find the spice’s mysterious source. Christopher Columbus wrote to Queen Isabella, claiming he had found cinnamon and rhubarb in the New World, but when he sent samples of his findings back home, it was discovered that the spice was not, in fact, the coveted cinnamon. Gonzalo Pizarro, a Spanish explorer, also sought cinnamon in the Americas, traversing the Amazon hoping to find the “pais de la canela,” or “cinnamon country.”

Around 1518, Portuguese traders discovered cinnamon at Ceylon, present-day Sri Lanka, and conquered most of the island, enslaving the island’s population and gaining control of the cinnamon trade for about a century until the Ceylon kingdom of Kandy allied with the Dutch in 1638 to overthrow the Portuguese occupiers. The Dutch defeated the Portuguese but held the kingdom was in debt for their military services, so once again Ceylon was occupied by European traders, handing the cinnamon monopoly over to the Dutch for the next 150 years. Ceylon then was taken over by the British in 1784 after their victory in the fourth Anglo-Dutch War. One main reason??? The expensive and rare commodity called Ceylon Cinnamon. Also known as the true Cinnamon.

Cinnamomum Zeylanicum is a tree indigenous to Sri Lanka which produces the highest-grade pure cinnamon.

Sri Lanka is the world’s largest producer and exporter of pure cinnamon to the world and pure Ceylon Cinnamon Suppliers from Sri Lanka claim 94% of global market share. True Cinnamon comes primarily from Sri Lanka, Madagascar, and Seychelles. Where as cassia is usually labelled as “Chinese cinnamon” or “Saigon cinnamon” and typically comes from Indonesia, China, Vietnam. If you go to a kitchen cupboard in North America, the cinnamon that you’ll likely find there is in fact not the true cinnamon, but rather a spice know as cassia.
Cinnamon differs both physically and chemically to Cassia. Ceylon Cinnamon, referred to as both sweet cinnamon and true cinnamon, is considered superior to the variety known as Cassia a cheaper and inferior product.

Global Nexus is one of the leading companies to bring genuine true Ceylon Cinnamon to North America. True Cinnamon is very mild and slightly sweeter than Cassia and not as harsh and spicy. Besides the superb taste of Ceylon Cinnamon, the most important difference between true cinnamon and cassia is in their levels of coumarin. Cassia has very high levels of coumarin compared to true cinnamon, and due to this fact, Cassia is quite toxic when ingested in large amounts which can lead to serious liver damage.

Sri Lanka has long been renowned for its spices, even before the island was ever known as Sri Lanka. The geography, location and local climate have culminated in the abundance of a rich, rare blend of spices that is a legacy in itself. The various applications of these spices in local cuisine, medicine, etc., throughout history, have virtually engrained them into the Sri Lankan heritage.

Known as the Spice Island, Sri Lanka was historically attractive to the Western nations for its spice riches. Sri Lankan Spice Suppliers export the most sought-after cinnamon, pepper, cloves, cardamoms, nutmeg, mace and vanilla. These grow in abundance all over the island in fertile and diverse soil types and varying temperature conditions. Silkeny is a trusted name to bring you the world’s best high quality spices.

Pepper (Gam Miris)
Desired for cuisines throughout the world, with its sharp and penetrating aroma, pepper carries an extremely spicy bite. Ceylon pepper is well known for its extra strength, its warm intense flavor and exotic mouthwatering taste.
Pepper is the second important commodity among spices and Sri Lankan pepper has high intrinsic quality.  And  has higher piperine content which gives it a superior quality and pungency. Pepper is offered in different grades for grinding and extraction of essential oils and oleoresins. In Sri Lanka pepper is grown in the wet and intermediate zones mostly as mixed crops.

Cloves (Karambu Nati)
Clove is the dried unopened flower bud of the evergreen tree, Eugenia Caryphyllata Thumb. The odour, flavor and oil contents are the important qualities of cloves. Sri Lankan Clove suppliers have a substantial market worldwide as Sri Lankan clove is found to be richer in oil than those from other growing countries. One of the best known of all spices, but also one of the most difficult to use because of their pungency, cloves are used in many types of curry and confectionery.

Turmeric (Kaha)
Turmeric is a plant. You probably know turmeric as the main spice in curry. It has a warm, bitter taste and is frequently used to flavor or color curry powders, mustards, butters, and cheeses. But the root of turmeric is also used widely to make medicine. Turmeric is used as a condiment in curries. A little turmeric and salt are all that is necessary to preserve fish and meat. In food and manufacturing, the essential oil of turmeric is used in perfumes, and its resin is used as a flavor and color component in foods.